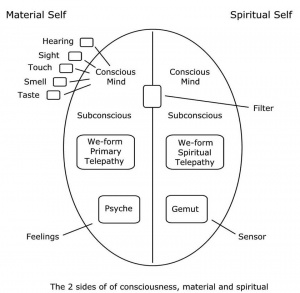 What is intuition and how does it work (incomplete)

Unknowledge prevails with regards to the exact facts in the various associated sciences.
For example in Psychology, Psychoanalysis and Psychiatry.

The Unconscious can be comparatively understood as something like say a ‘secretary’ or clerical assistant, coming before the Consciousness in the chain of information processing. Which autonomously takes in and sorts incoming Impulses and Perceptions i.e. facts. After or post which it provides the ‘preprocessing’ in a corresponding form, before the whole is then consequentially passed on to the conscious-of-itself material-consciousness.

This unconscious, which is not identical with the subconsciousness, has the ability to perceive everything lightning-fast which arises in and around the human being, the conscious material-consciousness is not capable of, and namely because it has a slower perceptual speed than the preceding unconscious.

So therefore it is only possible for the ‘secretary’ i.e. the unconscious, as a result of its tremendously fast perception-capability, to perceive all those things and to process them lightening-fast. Comparatively however due to its lower speed of perception processing, this lightening-fast processing speed is denied to the conscious material-consciousness.

Therefore the unconscious is able to take in impulses and perceptions with much greater speed and to form thoughts and feelings from them and to bring everything into effect, i.e. into manifestation, than that which is possible for the effective real and self-conscious consciousness.

So it comes about, that for example, if a dangerous situation, a happening, a situation or something else occurs, the unconscious reacts much faster and processes everything mentally in a flash, and indeed at a speed which is unascertainable for the real-consciousness, as this is not possible at this speed for the self-conscious consciousness.

For this reason, very often it happens that feelings arise in some situation, which are created by the rapid succession of thoughts of the unconsciousness, without these firstly being created by conscious thoughts, as this is usually the case.

With this it is meant, that under normal circumstances feelings are never created first and then thoughts arise from these, as is erroneously assumed and claimed, but rather that only firstly through conscious thoughts, feelings are also created.

There are no unconscious feelings, but only those which are also perceived consciously.

And in this process, which happens in a flash, the conscious, i.e. real-consciousness does not perceive the thought-process of the unconscious preceding it, which then in uncognisance of the facts, leads to the assumption that feelings would appear first and only thereafter would thoughts come forth.

Viewed and considered in the consciousness-based sense, an action-gain comes forth from the intuition, which leads back to many factors of the unconscious world of thoughts.

With the process of the intuition, an immediate and very fast reaction originates with regard to a case, deed, action, situation or to a happening or a problem and so forth, as well with respect to a thought-feeling-based or psyche-based or physical process.

This, for example, also if due to some circumstance the human being falls into a deep dread or anxiety and through the reaction his/her unconscious, i.e. unconsciousness the corresponding feelings are built, which then penetrate into the consciousness, through which he/she then, so to speak, is therein fully absorbed in his/her thoughts and feelings.

In this case, he/she is then virtually his/her anxiety and actions or his/her dread as well his/her thoughts and feelings herself/himself.

It often also intuitively comes about, that suddenly the right knowledge penetrates into the consciousness, as well as, how to rightly act in a case, situation or during some happening.

Through an intuition can something, a thing, an issue, a situation, a happening, an assessment; a thought-feeling-impulsation or a mode of behavior and so forth, be rightly appraised in a flash.

In this case, intuition is usually understood as a flash-thought, which is based on processes of the unconscious, i.e. unconsciousness which comes before the real-consciousness and comes about without conscious reflexion, i.e. without previous consideration.

With regard to the coming about and the origin of intuition, the whole thing can be explained very well in accordance with the spiritual teaching and in a simple and understandable way:

An intuition in the form that flash-thoughts with flash-cognitions and so forth appear, has a particular developmental process, which the human being, i.e. his/her self-conscious real-consciousness, however, does not become conscious of.

This means, that when through the unconscious, instantaneous perceptions are made, that then unconscious, unconscious and imperceptible for the human being, connects in a communicating wise with the deeper levelled subconsciousness and works together with it.

Through this cooperation of the unconscious with the deeper subconsciousness, everything is processed and clarified in extremely quick succession, and indeed because everything must happen immensely fast which cannot be consciously perceived nor clarified by the consciousness, such as e.g. is the case with a sudden problem, a scare or otherwise with a suddenly appearing happening or a situation.

Thereby the unconscious creates solutions with the stored knowledge-impulses of the subconsciousness and brings results, which are perceived as intuitive first thoughts as well as flash-thoughts, imaginations or feelings, i.e. as intuition of various form, which, however, do not occur through consciously controlled thought processes, but rather only intuitively.

Deeds and actions that proceed therefrom, are referred to by the human being also as ‘instinct-based’.

To that point, it is taught in the spiritual teaching, that the human being then ‘flows’ into himself/herself, and this especially, because in this state his/her unconsciousness is very active and works in great speed and stands in constant connection with the subconsciousness, as a result of which the intuitive is built up and comes about.

The result is then simply the intuition, which, if it is created through the cooperation of the unconscious and the subconsciousness, penetrates in a fully conscious wise as flash-thoughts, i.e. as intuition into the consciousness.

Intuitive capabilities can be furthered through constant training, and namely by furthering the conscious real-consciousness through all sorts of mental quickness exercises in such a wise that the thought-speed is furthered.

Fact is that the faster the human being can organize, care for and carry out his/her conscious thoughts and feelings, the more capable is he/she to think faster and faster, to control everything and also to organize it in a logical sequence and to handle it.

The whole thing enhances the capability of the conscious consciousness in this respect, that it becomes faster and faster in the perception- and processing-capability, which in turn leads to the effect that also the preceding ‘secretary’, i.e. the unconscious, i.e. the unconsciousness becomes faster concerning the perception and processing, because in this respect it always has to be superior in speed to the real-consciousness.

Such exercises of quick-thinking, quick-assessing and quick-acting are an effective training, through which also the intuitive capabilities as well as the activity of the brain are furthered and also an alert conscious consciousness-activity takes place.

This is a form of development, which means, that by this, so to speak, also a state of a ‘higher consciousness’ can be won.

If a high niveau (level) is reached, then therethrough also the intuition can be directed to a certain extent, and indeed in the wise, that the acquired life knowledge is thought-feeling-based spoken to and perceived and registered by the unconscious, in order to couple it together with the subconsciousness and to use it.

If this happens, namely that the unconscious gets in connection with the subconscious, i.e. the subconsciousness, then, as a result, logical aspects are formed from its entire knowledge and from impulses out of the storage-banks, after which the whole is expressed then as an intuition.[3]

Of course it's blazing nonsense, if, for example, it is claimed by the esoterics, that through the whole thing it can be seamlessly passed over into a so-called channeling, i.e. in consciously brought about contacts with spiritual beings (spirits) or with extraterrestrials, because neither a channeling in any such kind and wise is possible nor contacts with so-called spiritual, i.e. spirit beings.

Such drivel corresponds to an imagination, i.e. a delusion, from which simply human beings of delusional esoteric, occult, religious and sectarian form are befallen, because in this respect they are not capable of rational thoughts and feelings due to a delusion-belief or have lost this ability through suggestive sectarian insinuations, through laziness or neglect.

In colloquial speech and in literature various synonyms are used for intuition, such as first thought, flash-thought, gut feeling, instinct, serendipity, sixth sense, inspiration, a good nose and ‘brainwave’, etc., although various of these names are completely wrong, such as, inspiration, sixth sense, a good nose and serendipity, which fundamentally are to be expressed with other values.[4]