What is the Creation?

Excerpt from Stimme der Wassermannzeit (Voice of the Aquarian Age newsletter), No. 89 December 1993

Glory be to Creation. 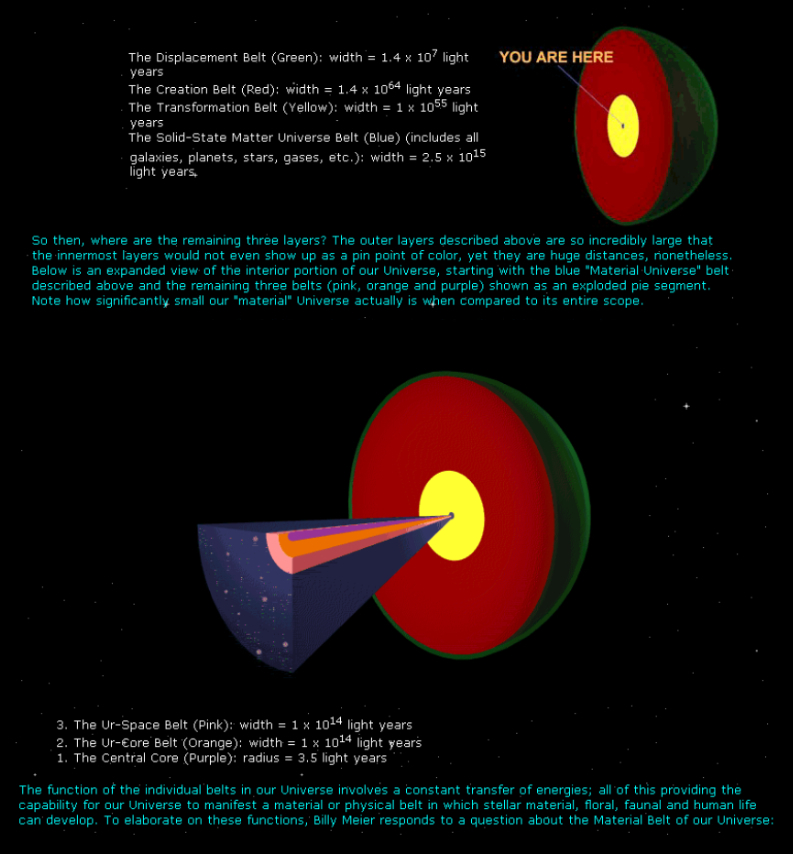 What is the Universal Material Belt?

An excerpt from FIGU Bulletin 5 by Billy Meier.

Reader Question: What is the Universal Material Belt?

Answer: The Universal Material Belt is that part or belt, respectively, of the Universe where matter exists, that is to say, planets, suns, galaxies, meteors, comets, gases, the entire dark matter and other things. All of these things exist only within this material belt, whereas no material whatsoever can be found in the internal and external belts (of which there exist seven in all). In the so-called Transformation Belt those forms develop from which matter develops that later exists in the Material Belt, hence in our visible DERN Universe. This is the only portion of the Universe we human beings are capable of seeing and exploring. We cannot see anything beyond it, for only total emptiness and blackness reign there. Absolutely nothing can be observed or detected -- even with the best modern astronomical or other extraordinary tools available to us. The inner and outer belts beyond our visible material Universe are practically endless, and are vast and dark if one excludes the innermost, radiant belt where the Big Bang originated approximately 46 trillion years ago. The aftereffects of the Big Bang continue to linger within the adjacent belt which, looking at it from Earth, is roughly 1.25 x 1015 light years away at its closest proximity. Terrestrial scientists are incapable of peering and listening into these depths of space even with the most elaborate super devices. And this indicates precisely the degree of our scientists' narrow-mindedness, when they claim the Universe is barely as old as the distance they can penetrate into the nearly endless space with their observation devices and contraptions. They do not have the remotest clue that the Universe extends far beyond what they envision it to be, and that it has six additional belts in total, which are void of any coarse material or matter. Matter itself is in constant transformation within the Material Belt and it is, therefore, subject to growth and disintegration processes. For this reason, matter can never be or become as old as the Complete Universe. At any given time, therefore, only young matter can be found in the Material Universe; matter that can, at best, be a mere 40 or 45 billion years old -- in a solid and compact state -- while the age of the Complete Universe beyond the Material Belt, respectively our Material Universe, amounts to approximately 46 trillion years.

The attempt to schematically depict the Complete Universe, is an impossible feat due to its colossal size. Additionally, its spiral-egg shape complicates everything even more. Nonetheless, here is an attempt by way of a circular diagram, a model, to illustrate an overview of what our Complete Universe looks like, which bears the name DERN Universe. The sketched proportions do not correspond in distance with one another, of course, since this is only a schematic diagram; for more specific data regarding this material I suggest you read Guido Moosbrugger's lecture, as printed in our FIGU pamphlet "Überdenkenswerte Vorträge" (Lectures to Ponder -- available only in German at this point).

In Guido's illustration, belt #4 depicts our Material Universe, that is to say, the part of the Complete Universe where the galaxies exist with suns, planets, meteors, gas clouds, comets and so forth. The Ur-Space (#3) is the belt from which emanates the so-called background radiation that leads back to the Ur-Core (#2), the actual Ur-Layer, in whose center lies the Central-Core (#1) that constitutes the actual Big Bang location, the Big Bang Center. Beginning in the Ur-Space, matter starts its development and then passes into the Universe Belt, hence, our Material Universe. This matter consists of energy, however, which intermingles with other energy forms that penetrate from the Transformation Belt (#5) into our Material Universe. The energy matter from Ur-Space is POSITIVE, while the other matter from the Transformation Belt is NEGATIVE. As they join in the Material Universe, they develop into new energy forms from which, ultimately, coarse matter evolves. In the Transformation Belt (#5) the fine matter energies of the Creation Belt (#6) are transformed into energy forms that already extend into the realm of material energy. This makes them absorbable by the Transformation Belt, and they are turned into coarse energy. The Creation Belt (#6) absorbs the finest of energies from the space of the Absolute Absolutum, which is located beyond the Displacement Belt, also called Ram Belt (#7), whose function it is to nudge away the walls of other universes that float within the space of the Absolute Absolutum as well. The Displacement Belt also performs another function, namely that of absorbing the finest energy matters from the Absolute Absolutum sphere and passing them on into the Creational Belt. This process supplies the Complete Universe with all the indispensable energies it needs to exist. Although it created itself or, rather, was created through the Ur-Idea of the previous Ur-Creation, one can see that the Complete Universe nevertheless requires external energies -- in this case from the Absolute Absolutum -- upon whose finest energies ultimately 1049 different forms of Creation depend in infinite number. Regardless of the fact that the Complete Creation, Universal Consciousness, or whatever one wishes to call the Complete Universe, is capable of supporting itself, it nonetheless requires some force, an energy, that enables the Universe to achieve it. This force or energy is provided by the Absolute Absolutum. The Absolute Absolutum is the only entity capable of passing on the indispensable and fundamental energies to all existing forms of creations within the entire vastness of all Creational forms, so that they, in turn, have the capability of being able to support themselves. And yet, even the Absolute Absolutum is dependent upon an external life energy, which it does not draw from a higher type of Creation, but directly from what human beings call Absolute Nothing. The Absolute Nothing does, however, contain the fundamental, finest energies from which the Absolute Absolutum self-created itself an unfathomably long time ago.

The current Universe, our DERN-Universe is a partially material-universe, which is the absolute lowest form of spiritual energy in the whole BEING of ALL things. When a Creation is created by an Ur-Creation it has for its very first evolution a partially material universe and creates human spiritforms in order to evolve itself. After this very first stage of evolution will all subsequent stages of evolution go on in a purely spiritual manner, that means that after the upcoming sleep-period of Creation the next Universe will consist of purely spiritual-energy with NO coarse-material matter at all, the consistency of the spiritual-energy will be finer and finer each cycle. After 10^49 levels of evolution in 7-fold increasing time-periods (Each evolution-level will take 7 times longer then the previous evolution-level) will the transition take place to the Absolute Absolutum, the lowest of the Absolutum-forms.

An Example how this would translate to human timeframes, this is not a real cycle, just to make it more understandable:

The evolutionary times of the Creation measured in years:

From the highest to the lowest absolutum-form:

The Absolute Absolutum is the one Absolutum-form that created the very first and lowest Creation-forms, the very first material universes, which evolved up to the first Ur-Creations which on their turn created new material-universe Creations.

The other six (6) Absolutum-forms do not create universes / creations.

Q: What is value creation?

A: It is a business vernacular. It should be a primary aim - in business that is.