A Short Biography of Billy Meier 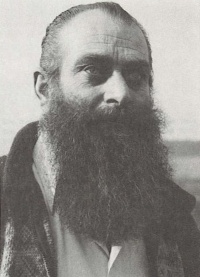 Eduard. A photo of Billy Meier included in a book written by Wendelle Stevens called Message from the Pleiades.

"Billy" Eduard Albert Meier was born on 3 February, 1937 in Bülach, Switzerland. He was the second of seven children. His father was a shoemaker.

Starting 3 February, 1953, Asket. an extraterrestrial woman from the DAL Universe, took over from Sfath. For 11 years, under her guidance, Eduard made many long trips through Europe and Asia, in order to learn and study many abilities and professions, and to prepare himself for his future mission of being a prophet, mediator and teacher. By way of time travel they visited the past and even met and spoke with Jmmanuel, who lived two thousand years ago.

For another 11 years Eduard had to find his way without personal guidance from extraterrestrials.

On 3 August, 1965, in Iskenderun, Turkey, Eduard Meier lost his left arm in a car accident.

On 25 December, 1965, Eduard Meier met K.M. in Saloniki, Greece. Two months later they married. They traveled and lived in Turkey, Pakistan and India, to name but a few. On 9 September, 1967, their daughter Gilgamesha was born in Quetta. Later, after returning to Switzerland, two sons were born: Atlantis-Sokrates (9 August, 1970) and Methusalem (31 October, 1973).

28 January, 1975 was the official start of Billy's mission, when he first met Semjase, a woman from the Pleiades/Plejares.

Between January 1975 and summer 1996 Billy Meier had - besides a lot of unofficial - about 250 official (= with information for the public) contacts with Extraterrestrials Semjase, Ptaah, Quetzal, Asket, Nera, Taljda, Menara, Pleija, Florena and others. Most of those talks were written down and published in the Contact Notes (German only).

Where did Billy get his nickname?

On one of his long trips through the Orient, in Teheran, Iran, he got the nickname "Billy" from an American woman named Judy Reed. Eduard Meier, wearing a black hat and a gun belt, reminded her of "Billy the Kid", the "legendary gunman of the Wild West."

Clarification of a Defamatory Claim:

According to defamations by antagonists, "Billy" Eduard Albert Meier is allegedly claiming to be a direct reincarnation of Jesus Christ. - This defamation is nothing more than a primitive lie and despicable imputation!