The website, FIGU and the interested community generally, recommends harmonious forms of music. Folks should probably calm down before finding all this information and reading it, but it doesn’t always happen in that order. You’ve found it now anyway. Enjoy peaceful, tuneful classical and pleasant-sounding music while you read, or perhaps while you do other things...

What today's youth, and even many adults today, 'treat themselves to' with regards to 'music', is catastrophic and no longer has anything to do at all with good, harmonious music. It is no more than explosives, which make the ears deaf and also poison the consciousness as well as the world of the thoughts, feelings and psyche and even makes the body sick.

It's not only known about by us Plejaren, it's also known about with the human beings of Earth too. The might of music has been known since ancient times, particularly with the terrestrial peoples of the ancient advanced civilisations, who knew that the might of good, positive music helped civilisations to boom, [continue reading]

while, in turn, negative, bad music, sealed their downfall. Primarily, great philosophers knew about the might of the music and its influence on the society, this both in relation to the rise and also to the downfall of civilisations. However, they also knew about the might of harmonious, good and positive music, through which the intelligence could be promoted and the psyche refined, or that through disharmonious-negative-bad music much terribleness had been wrought, to which entire advanced civilisations fell victim. However, they also knew that in the brain of the human being, under certain circumstances, music calls forth frequencies similar to hypnosis, and indeed both in the good and positive as well as in the evil and negative. The human beings of the ancient advanced civilisations were clearly aware that through good, harmonious and positive music, the human ability to learn increases enormously and also the character as well as the good and positive modes of behaviour become refined. For the human being, music is one of the most important factors of life regarding the formation of his/her thoughts, feelings and the psyche, because it imparts to him/her a value-consciousness, but unfortunately, not only in the good and positive, but also in the evil, negative and bad. If the value and the might of the harmonious music are set highly, then the human being also feels uplifted and feels impulsations of equalisedness, love, peace and freedom in himself/herself, whereby in the same wise also his/her morals and modes of behaviour are equally formed. However, if the music is disharmonious, inferior to completely valueless, then the human being becomes pressed down by aggressiveness and unequalisedness and finds no access to real love, to true peace and open freedom, nor to a valueful moral state, nor to corresponding modes of behaviour. And on Earth today, exactly this evil, negative and bad form prevails among countless human beings of Earth of all ages because they are ensnared by the might of this malicious and disharmonious music, which, since the 1980s, has been deemed to be 'modern' and transfixes all those human beings of Earth who in themselves are aggressive, unequalised, unhappy, unorderly, abusively negative, unsatisfied, often conscienceless, rebellious, even malicious and irrational. The human beings of Earth should therefore follow the example of a child, because as long as they are not influenced in a bad wise by evil, disharmonious, negative and bad music, they are open to good, harmonious and positive music. Thus, if the child is observed, then it is to be said with respect to this, that the child, at least as long as he/she comes in contact with normal, good, harmonious and positive music, is better able to perceive certain nuances in the communication, and indeed fully independently of whether he/she can enjoy any good music lessons or not. This indicates that through the music, the child can learn to pursue his/her own thoughts, feelings and emotions, and is able to sense whether or not everything is right with other human beings through the sound of their voices. However, the world of music and its tones enables not only the child, but also the adult human being to better understand his/her surroundings and to communicate with fellow human beings. Among us Plejaren, for millennia it has no longer been a secret how much music promotes the development of the human being in many areas, also cognitive, mental, emotional and social capabilities.

...From this it also can be recognized that among the countless noises occurring in nature, many sounds and tones appear, which sound harmonious and fundamentally already embody a structure of music.

23. In addition, it is to be frighteningly noted with the people of the Earth that they make so-called music that truly has nothing at all to do with music and that influences the psyche and the consciousness so destructively that the worst disharmony arises.

24. But this so-called music is the reflected likeness of those who produce or listen to it, whose psyche is agitated and destroyed and whose evolution is frighteningly stagnated, in that these people are hostile to life and incapable of sustaining their own lives, and they stroll along the path of massive destruction.

26. This, in contrast to truly harmonious music, which develops the psyche and evolution, which is affirmed in a life of respect for human beings and respect for other life forms, in compliance with the life-promoting laws and commandments.

...related to the sounds, tones and music in nature. It's the case that all other life forms are affected by it and even all coarse-substantial and fine-fluidal material as well as all that which is high-fine-fluidal, throughout the universal expanse. [continue reading]

By means of these sound and tone swinging waves, all plants and all life-forms in general move, as well as all atoms and all more minute substances, as also all planets, suns, comets, meteors, nebulas and asteroids and so forth, wherethrough they generate a kind of music that is attuned to each of their kind, which I want to describe as musical whooshing and humming throughout the entire universe, whereby therethrough also a certain healing power is emanated in many ways. Therefore, also every life form, no matter what genus or species, is hit by these universal-energetic musical-swinging-waves together with the cosmic-electromagnetic life energy, and, according to its own individuality, sends out harmonious or disharmonious sounds and tones that I will also describe as a form of music. Already your father Sfath has explained all that to me in this wise.

INTRODUCTION - MUSIC RELEVANT EXCERPTS - SOURCE
Source: FIGU-Landesgruppe Australia article Effects of Good and Bad music (external) - a lengthy page with a collection of contact reports translated to English which are relevant and related to music. 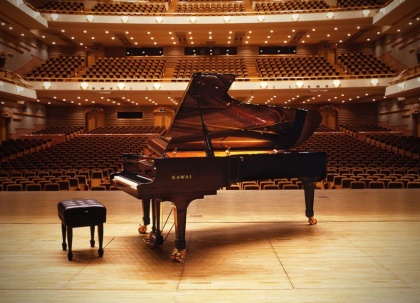 Search for any of these names on the internet for their music. These youtube links will open in the ipad app if you have it.
ClassicFM (External website) - Classical and traditional music live radio.

List of examples of other styles of peaceful music

The reasons 440 hertz tuning was chosen as the standard is a matter of some debate.

Special information on this: BEAM said in July 2018, in response to a question on this subject, that there is a thoroughly realistic connection between the so-called 'divine tone' or the 'creative tone' and the so-called 432 hertz music.

If musical performances were to sound the same the world over, some standardisation was required. As early as 1885, the Music Commission of the Italian Government declared that all instruments and orchestras should use a tuning fork that vibrated at 440 Hz, which was different from the original standard of 435 Hz and the competing 432 Hz used in France. [continue reading]

In 1917, the American Federation of Musicians endorsed the Italians, followed by a further push for 440 Hz in the 1940s.

In 1953, a worldwide agreement was signed. Signatories declared that middle “A” on the piano be forevermore tuned to exactly 440 Hz. This frequency became the standard ISO-16 reference for tuning all musical instruments based on the chromatic scale, the one most often used for music in the West. All the other notes are tuned in standard mathematical ratios leading to and from 440 Hz.

This tone standard is now universally accepted, which is why a piano in Toronto sounds exactly the same as a piano in Tokyo.

No one can say for sure why this frequency was chosen in the first place. In fact, there are those among us who vehemently disagree with this standard, they consider the 440 Hz middle “A” to be an abomination against nature.

Adherents to this theory claim that a more “natural” frequency for middle “A” is 438 Hz. Others believe that the correct middle “A” is 432 Hz (also known as Verdi’s A) because it has “a pure tone of maths, fundamental in nature” and is “mathematically consistent with the patterns of the universe, vibrating with Phi, the Golden Ratio”. They point to how this pitch can be connected to everything from nautilus shells to the works of the ancestors, including the original construction of the Great Pyramid.

Research indicates that music tuned from this frequency is easier to listen to, brighter, clearer, and contains more inherent dynamic range. As a result, music with this tuning need not be played at higher volumes and thus reduces the risk of hearing damage.

Here’s where the conspiratorial component manoeuvres into position. There is allegedly something sinister going on with 440 Hz. It is said that the Rockefeller Foundation had an interest in making sure the United States adopted the 440 Hz standard in 1935 as part of a “war consciousness” leading to “musical cult control.”

Without going too far down this avenue, this theory says that tuning all music to 440 Hz turns it into a military weapon.

I quote from one of the many online articles on the subject:

“The monopolisation of the music industry features this imposed frequency that is ‘herding’ populations into greater aggression, psychosocial agitation, and emotional distress; predisposing people to physical illnesses and financial impositions, profiting the agents, agencies, and companies engaged in the monopoly.”

You can carry on reading the article at the URL link in the title.

FOM Note: video reported as out of tune, using wrong frequencies and notes.

And now for something we can agree on

Note: Flash and Javascript required. If desired, you can upload your own mp3 files and xml playlist file then create your own Wiki page to play them just like this one. Available web space is unrestricted.