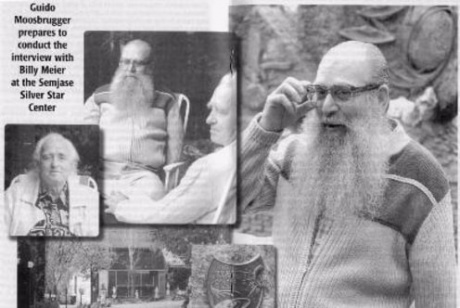 A Word About Billy and His Work

Much has been written about Eduard Albert Meier, who is called Billy, and much of it has been far from being flattering or objective. It seems that every human has his own subjective concept of what, or rather who, Billy Meier is. The fewest know him personally, and when they do they know him not good enough to form an unbiased opinion about him.

Most people connect him with UFOs, what is most likely, since his UFO photos are known all-over the world. However, this UFO thing is pushed into the background more and more, and his main occupation comes forth ever distinctly: He is a penman, a writer who has already written thousands of pages, indeed not just novels--although he has written some--but writings whose content stimulates thinking and gives each person the initiative to ask ever more questions and, through this, to grasp ever more answers. He is the author of umpteen books that are written in a wonderful and understandable language. His (book) lines lead into worlds of which we have not dreamed yet. He gives nourishment to our dreams and lets our fantasy turn head over heals by touching strings within ourselves and letting them vibrate, something we possibly would have never discovered.

Billy is the author of many readable and interesting books. Why do most people not realize this? They define Billy through his UFO photos only, whether these are genuine or not. Simply a waste of time. They do not realize or know that Billy's task and main occupation is to write and teach. He does this so masterly and with a fluency that every sentence fits and is correct in its meaning. And all of this is achieved in one go, without additional correcting of sentences or content. That will not be imitated too easily by the so-called authors, who polish and potter around their books for years, until, ultimately, they publish it. All the while Billy--as a rule--writes a book in a few weeks or in two or three months, that is with a worthy content.

Billy has worked in a great variety of activities in many different professions, in order to ultimately being literally left sitting with the most difficult and ambitious work--to the luck of all people who read and study his books, and who are grateful that all of those tremendously big treasures have been written down by him and are recorded in writing.[1]

His most important work

The most important book, in the Billy Meier case, used to be the OM. But now it is the Kelch der Wahrheit, which means, Goblet of the Truth. People have been asking themselves, what makes the 'Goblet of the Truth', more important, than the OM? Well, Badr (of the FIGU forum) has been able to obtain, a few pages of the book, and this is what he had to say.

Having had the chance to read some of the book “Kelch der Wahrheit” I thought I might as well tell you and others a little bit more about it, then I already have.

As mentioned previously it is the teachings that were given to earth humans by the other 5 prophets of the 7 in the linage. Basically the difference I noticed between this new book and the OM is that this new book goes into a bit more details about ways to go about doing thing like trade for example and suggestions of certain initiatives that would protect the consumer which I have not heard of before. Certain things are cleared for example in relation to marriage and kids, homosexuality, inheritance, fasting, gambling, war and many more things but not everything is new to us “meaning that Billy had written about some related things in his earlier writings”.

It is very interesting to see how the teachings back in the days had so much details of how to go about doing things. While reading I can see the wisdom of the suggestions being given and how much it would improve our life compared to our existing “laws and regulation”. But also sad that it never bore any fruit, because of this I can see much resistance from the people in power towards this book. This book is another chance to spread the forgotten and suppressed teachings of the old prophets. The OM on the other hand seemed to focus more on wise sayings, aphorisms, history and so on.

I will repeat again the book has still not been published yet. I would be happy to inform everyone once it’s published, it would be probably in this topic.

PS: While I was on my vacation to Switzerland, Billy had made it clear to the people around him at that time that the English translation of the word “Kelch” should be Goblet. As there was a little mistake in the initial translation.[2][3]