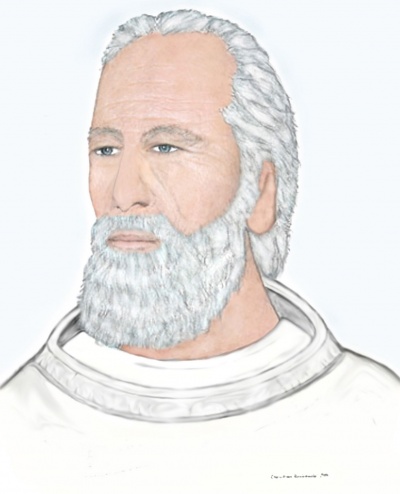 Ptaah is about 775 (Earth) years old (outdated 2023) and has three children, two daughters by the names of Semjase and Pleija and one son by the name of Jucata who is no longer alive. His father was called Sfath and one of his nieces is Asket. Ptaah is the commander of the Plejaren spacecraft fleet and is vested with the rank of an Jschwjsch, (JHWH), which is comparable in meaning to a king of wisdom. In earlier times, this term was translated as God, not in the sense of creator but as a king of wisdom who has the duty to provide his peoples with help and advice. He also presides over other inhabited planets but may never assume the role of despotic ruler, which happened on earth to some extent in earlier times. At the present time, Ptaah presides over three different planets, two of which are known to us as Erra and Terra (earth).

Ptah spelled this way with one a, is the way the Egyptian deity Ptah is spelled and is not Ptaah for obvious reasons, ~2.5 thousand years or so ago.[citation needed] However in Contact Report 031 line 6-10. Ptaah explains that an ancestor of his had the same name, and indeed was this Ptah. Apparently Ptaahs ancestor Ptah was an Jschwjsch, married to Basth, presumably extraterrestrial, and was openly communicating with the Egyptians by deduction. This is not the first time we have been given a story like this by Ptaah, according to a FIGU forum questions answered by Billy comment,[citation needed] Ptaah himself lived in Greece for a period of time (a few hundred years ago) and another great-great grandfather of his, Hilak was also involved with Earth in some way.[citation needed]

According to Earths very old traditions, tales and legends about Egyptian Ptah and South American Ptah, he said he "existed before all other things" and, "by his will, thought the world into existence". "It was first conceived by thought, and realised by the Word". Statements which were they actually said by him i.e. were not myth or legend, do standalone as somewhat sensical in the context given in the overall story.