Recently I've come across some attempts by two people to reproduce the famous (among the Meier-knowledgeable Ufologists that is) Beamship Sound. One was using a guitar amplifier, a microphone and a tape recorder. The other used a model of the WCUFO suspended on a tensed fishing line tied between two trees. In this article I compare all 3 sounds via looking at their spectrograms which is one way to "see" a sound over time. A spectrogram is created by applying certain Math formulae called "Fourier transforms" to the digitized waveform.

A spectrogram typically shows time along the x-axis, frequency (pitch) along the y-axis and the amplitude (loudness) is presented as a brightness in the plotted data. The brighter the colour the higher the amplitude. If you were ok at basic Mathematics at school you'll be able to understand a spectrogram.

I've seen a spectrogram of the Beamship Sound before; Badr on the FIGU forum created one; however it wasn't a very clear graphic so I've reproduced it here using Adobe Soundbooth CS4: 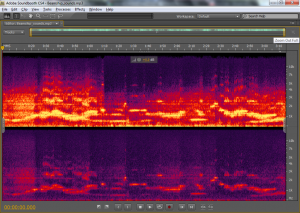 Spectrogram of the Beamship Sound

If you examine the spectrogram to the right, which is only a 3-minute mp3-format ( 44Khz ) sample of the 20-minute full sample available from FIGU, then you can see that there are some obvious conclusions to make of it:

Now compare that to 2 recent efforts to duplicate the Beamship Sound below.

Some anonymous guy who calls himself Uzzz allegedly made this amplifier feedback effect with a guitar amp, tape recorder and a microphone: 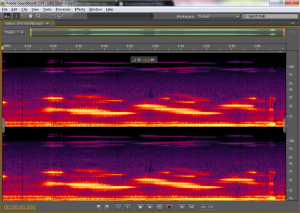 A basic analysis shows clear differences in this sound sample to that of the Beamship Sound sample:

In fairness the uploader of this amplifier feedback video to Youtube claimed that the variableness of the frequency values could be reproduced with a pitch shifter but I haven't seen this claim being tested yet and I do not have the required equipment so it's not possible for me to verify that theory.

A British man called Phil Langdon has attempted to duplicate the Beamship Sounds using a small model of a Wedding Cake UFO suspended on a fishing line that was tied between two trees. The vibrations of the wind against the hollow model caused a similar effect to the Beamship Sound we are familiar with but it was far too quiet (like the amplifier feedback) compared to the 3km audibility of the original sound effect. The 3km loudness of the sound was according to multiple witnesses who also never saw any equipment apart from 4 tape recorders and an audio suppression unit that Meier held in order to prevent distortions of the recorded sound because of the excessive decibels coming from the beamship 60 metres above his head. 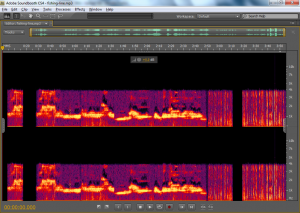 Spectrogram of WCUFO model on a fishing line

A basic analysis again shows clear differences in this sound sample to that of the Beamship Sound sample:

So far the Beamship Sounds have still not been duplicated by any Earthly means. There are similarities that are detectable by ear however when viewing the sound reproductions in the form of a spectrogram the differences become obvious and significant. The possibility that the original beamship sound originated from an actual and real beamship cannot be ruled out by any logical deduction. If it were easy to reproduce then why hasn't it yet been done? Perhaps the logical answer is that it is a sound sample produced by an advanced technology, hence a beamship.