This article takes a look at the findings of IIG regarding Meier. URL:

On the main page of IIG we read: "The Independent Investigations Group investigates fringe science, paranormal and extraordinary claims from a rational, scientific viewpoint, and disseminates factual information about such inquiries to the public."

Basically, like Meier debunker Korff, IIG plays down the real anomaly that the case is. They oversimplify things. IIG obviously prefers ignoring and also explaining away the many strong aspects with some seemingly weak aspects. Ironically, even their explanations for the weak evidence obviously has some serious problems. Remember this is not an attempt to prove the reality of the case, only to show how scientific and rational their investigations are.

IIG AND THE ASKET AND NERA PHOTO DECONSTRUCTION

Background info. According to Meier, during a five-day space trip in 1975, aboard an alien spaceship and in another universe, he was allowed by his contactors to take photos of the alien women Asket and Nera. Meier's Verzeichnis photo catalogue lists three Asket and Nera photos, namely photo #109, #110 and #111. Below the three photos are presented.

IIG's explanation for these photos. According to IIG the "Photographs Are Actually Of A Singer From 1969-1973 Era Of The Dean Martin Variety Show". They literally write: "Here is the truth about these photos. The person identified on the left as Asket is actually the singer and dancer Michelle DellaFave." 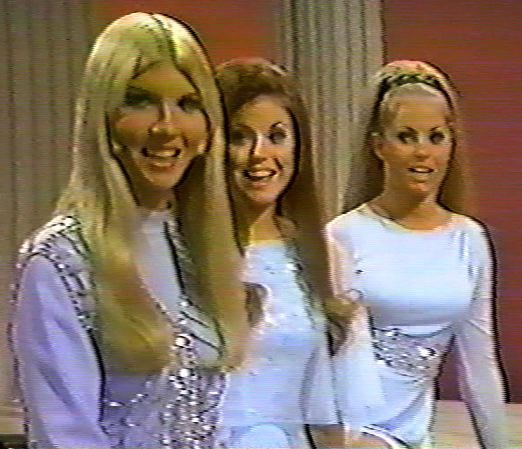 Meier's explanation for these photos. The original photos of Asket and Nera were adulterated using pictures of two doubles(Michelle DellaFave and Susan Lund) performing in Dean Martin Variety Show, as elements of this falsification. In detail it is mentioned by FIGU in an article:

Meier came with this explanation in 1998 shortly after UFO researcher Kal Korff had discovered and promoted the similarities between Dean Martin Show scenes and Meier's photos. Before 1998 Meier had published the pictures as being authentic.

Below I will present some points of critique regarding IIG's deconstruction of the Asket and Nera photos.

Change in explanation. Regarding Meier's above mentioned change of explanation IIG writes: "Why the change of explanation in 2001? It seems to be rather simple. In the 1990s videotapes of The Best of the Dean Martin Variety Show were released (on home video)." By omitting two important points IIG make seem Meier's change more abrupt then it really is.

So this adds credibility to Meier's version of the truth that Mr. Schmid had manipulated the photos from this trip. Knowing the above mentioned point one may ask: Would a hoaxer publish an official contact report mentioning the fact that there are look-alikes of Asket and Nera in America, and then he go ahead and sell photos depicting the Dean Martin women (from America), claiming they are Asket and Nera? That doesn't qualify as a careful cover-up.

The faces are different. Another important point ignored by IIG is that the faces of Asket and Michelle DellaFave are different. The face of Asket has a narrower chin and smaller mouth and generally the lower part of her face is smaller. Also note that Asket's face has a more peaceful, less aggressive, more positive and refined expression. This adds credibility to Meier's explanation that Michelle is a double of Asket.

Witnesses. What IIG also leaves out of their reasoning is the fact that at least two people have gone on record witnessing Asket back in the 60ies. These persons are Phobal Cheng and her brother.

UFO researcher Michael Hesemann writes about this in an article: "During an elaborate Indian dinner, to which she had invited me [Phobal Cheng], the lady recounted: “In those days all of us at the Mission saw the spaceships” and Meier was in contact with their pilots. Additionally, she had seen him “walking across the court yard of the Ashram accompanied by a woman with long, brunette hair, dressed in a type of spacesuit.” Her grandfather also had been provided with opportunities to speak with the extraterrestrial visitors. I listened to this lady with baited breath and made a promise to her that I would keep her name confidential and would not mention her homeland to anyone. She simply did not want the publicity due to the sensitive nature of her diplomatic position."

IGG hasn't found the exact source frame(s)/segment. It should be noted that IIG fails to provide the exact frames/segments from the show that were used for the photos.This in fact adds credibility to Meier's explanation that only elements of the pictures of the Dean Martin Show were used for the falsifications.

Meier photo #109 greatly resembles the frame presented by IIG, however a closer look shows it certainly isn't a 100% match (see pictures below).

IIG AND THE DINO PICTURE

CLAIM: Billy Meier Published Photographs Of Dinosaurs That He Claims Were From A Trip He Took Into The Distant Past

What IIG ignores or doesn't know about this photo. The fact is that even Billy Meier himself doesn't claim that this space-trip picture is genuine. The space-trip photos also aren't listed in the Verzeichnis photo catalogue. Meier never claimed the photo was authentic and has stated that this is one of the photos he suspects of having been falsified by others. The photo may contain some authentic elements. Meier's complete clarification regarding this photo can be read here: The_Pteranodon_Photo.

IIG AND THE FIRE SHIP DECONSTRUCTION

IIG’S FINDINGS: Photographs Are Actually Of What Appears To Be Burning Steel Wool

IIG also states: “This is an example of Billy Meier apparently not expecting people to know how the images in his photographs could be created and published them as "evidence" of being contact from extra-terrestrials.”

A point IIG fails to mention. I agree that IIG has presented relatively good recreations, however a point not mentioned by IIG is that this photo proves the existence of an accomplice. It seems very unlikely that Meier could, at the same time, accomplish the following actions: a) create the effect of burning static electricity and b) taking a photograph. Of course, no accomplice has been found until this day. One also wonders why would two hoaxers go through the trouble of creating this weak evidence and weaken the overall accumulation of evidence in the case?

IIG doesn't mention that craft seems larger than recreation using trash can lid. IIG explains Meier’s WCUFO as being a model made of all kind of household objects like a garbage can lid, a lid of pressure cooker and Christmas ornaments. According to IIG one of the main components of the WCUFO is a Harcostar garbage can lid with a (maximum) diameter of 47,1 cm. However, some of the photos show that the part of the UFO that allegedly is the lid is probably larger then 47,1 cm. The following photos show one Meier photos (#844) and a recreation.

Note that the tree in Meier’s photo has more foliage and there is a much larger variation between larger and smaller branches. In short the tree in photo #844 displays characteristics of a larger tree and thus Meier's UFO is larger than Langdon's UFO model. This once again shows that the situation is less simple than IIG wants us to believe and that they are oversimplifying things.

After the detailed WCUFO recreations by Phil Langdon in 2009 apparently the time was right for FIGU to strengthen the WCUFO evidence since they for the first time released a very detailed version of one of the more spectacular WCUFO photos. The following pictures show a cropped version of Meier’s photo #850 and Phil Langdon and his tree that was used in his 2009 recreations. Note that the tree in Meier’s photo seems to be considerably larger and thus it shows that diameter of the WCUFO is larger than 47,1 cm (the maximum diameter of the garbage can lid).

IIG AND THE WANDERING TREE DECONSTUCTION

Obvious false claim by IIG. IIG writes "The same tree appears to have been used in these different photographs and films because the trees all share the same physical characteristics and the tree is the same size and shape even after 6 years. Also, the photos and the films were each taken in different cities, there is no evidence that a real live tree ever existed in any of these locations, and the official explanation from Meier and his followers is that the extraterrestrials erased people's memories about the tree, but they left the photographs and films alone."

Anyone who does a little basic research immediately sees the obvious differences between the 1976 Fuchsbuel tree and the 1981 WCUFO tree. Check the detailed photos on pp. 70-71 and 74-57 in FIGU's Photobuch.

An important point ignored by IIG. IIG writes: "However, it has been revealed that most of the photographs looked at were not the original negatives or slide positives. The photos that were sent out were, most often, duplications or lithographs. This makes the photos useless for examination and research.":

IIG ignores that the original material isn't required to determine that some of the photos show aspects that are at least very difficult to hoax.

Dilettoso (and other researchers) didn't only look for signs of multiple exposures or paste-ups of the object in the photos. Diletosso also used techniques to estimate the size of the UFO (edge identification analysis).

IIG fails to do basic research.

IIG’S FINDINGS: It Is Impossible For Meier To Have Recorded Audio Outside The Range Of Human Hearing

The main point to notice here is that if IIG had done some basic research into the matter they would have noticed that on pp. 430-431 Wendelle Stevens writes in his Preliminary Investigation Report that there were never recorded on tape frequencies outside the human hearing range by Meier. However, these frequencies were only conjectured by Dilettoso using calculations using certain formula.

IIG also writes: "It is these eight inaudible frequencies that Meier and his supporters use to promote the extraterrestrial nature of these audio recordings."

Vogel reportedly used mass spectrometry and the x-ray deffraction technique to determine the elemental composition of the sample. Again anybody doing some basic research about the case will soon find out this truth. See p. 424 of Stevens' 1982 book.